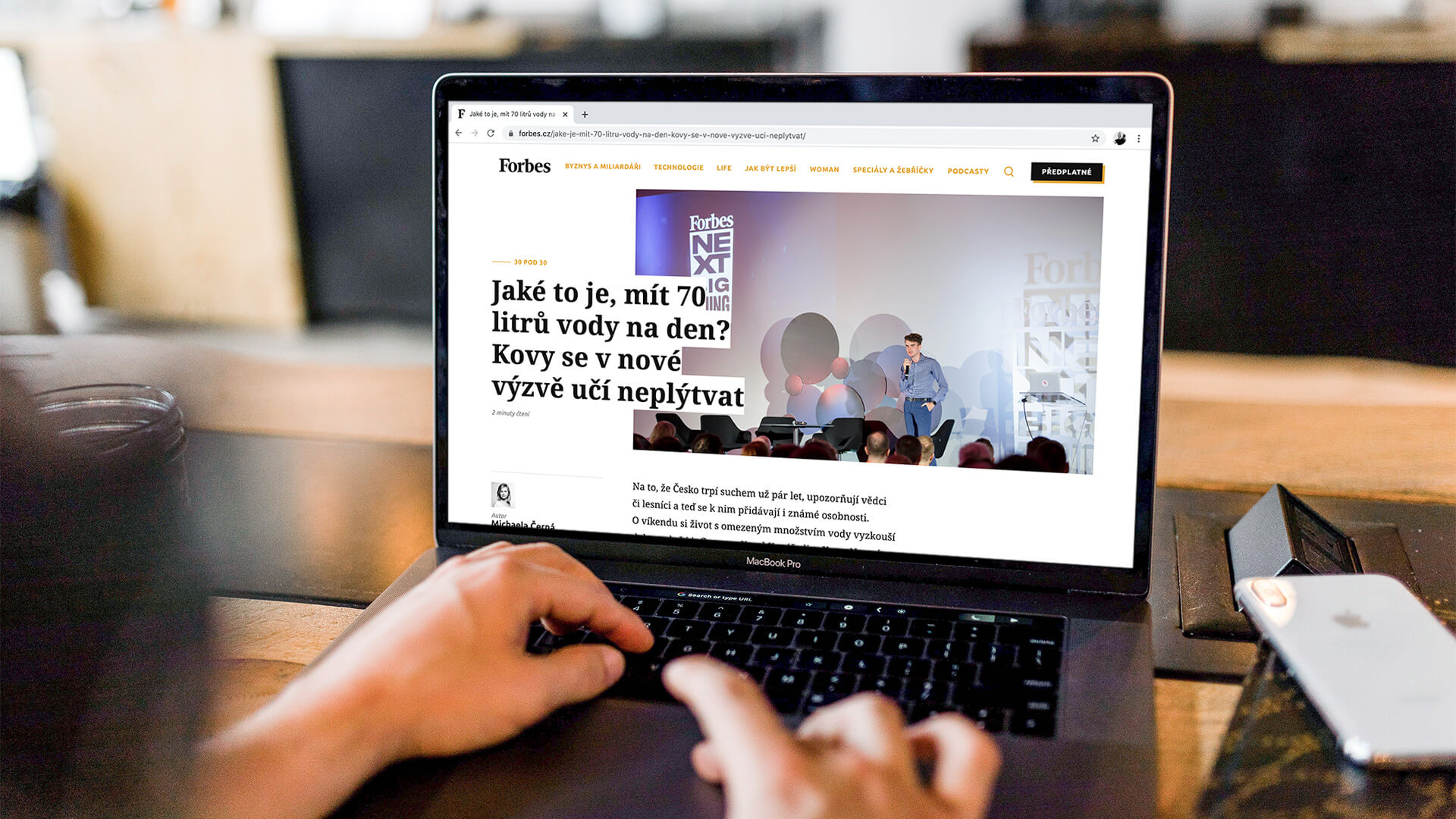 Quality, technology, design and sustainable development – these are the four key values of Grohe, the leading global manufacturer of sanitary equipment. In Czechia, Grohe is a synonym for luxury, top quality and design products; however, sustainability is not frequently discussed. It was our task to change this.

We go beyond the target group limits

Grohe customers are people about 28+ years of age interested in technology, who are concerned about buying a home, remodeling, or who already have their own place and are interested in ecology and a sustainable way of life.

However, saving water goes beyond this target group, which is why we addressed the general public in our campaign.

We set the number of banner displays and clicks on campaign and company web sites as KPI.

“Drinking water sources are limited and the responsibility for dealing with them is up to us. We all are shareholders in Voda.ltd and we cannot fail and go bankrupt.”

We spread this idea on Facebook, Instagram, through influencers and PR articles. We chose the communication channels based on the budget and optimization of results. Take a look at what we flooded the Internet with. 👇

University of Chemistry and Technology, Prague (VŠCHT) worked with us and helped with the professional contents, and we shared tips on how to save water. We do not go deep into details – we want to start a discussion and make people think about how they can help.

The social network campaign started with posts showing simple statistics and infographics on how much water is wasted. In the second phase of the campaign, we introduced Grohe products that can help save water. 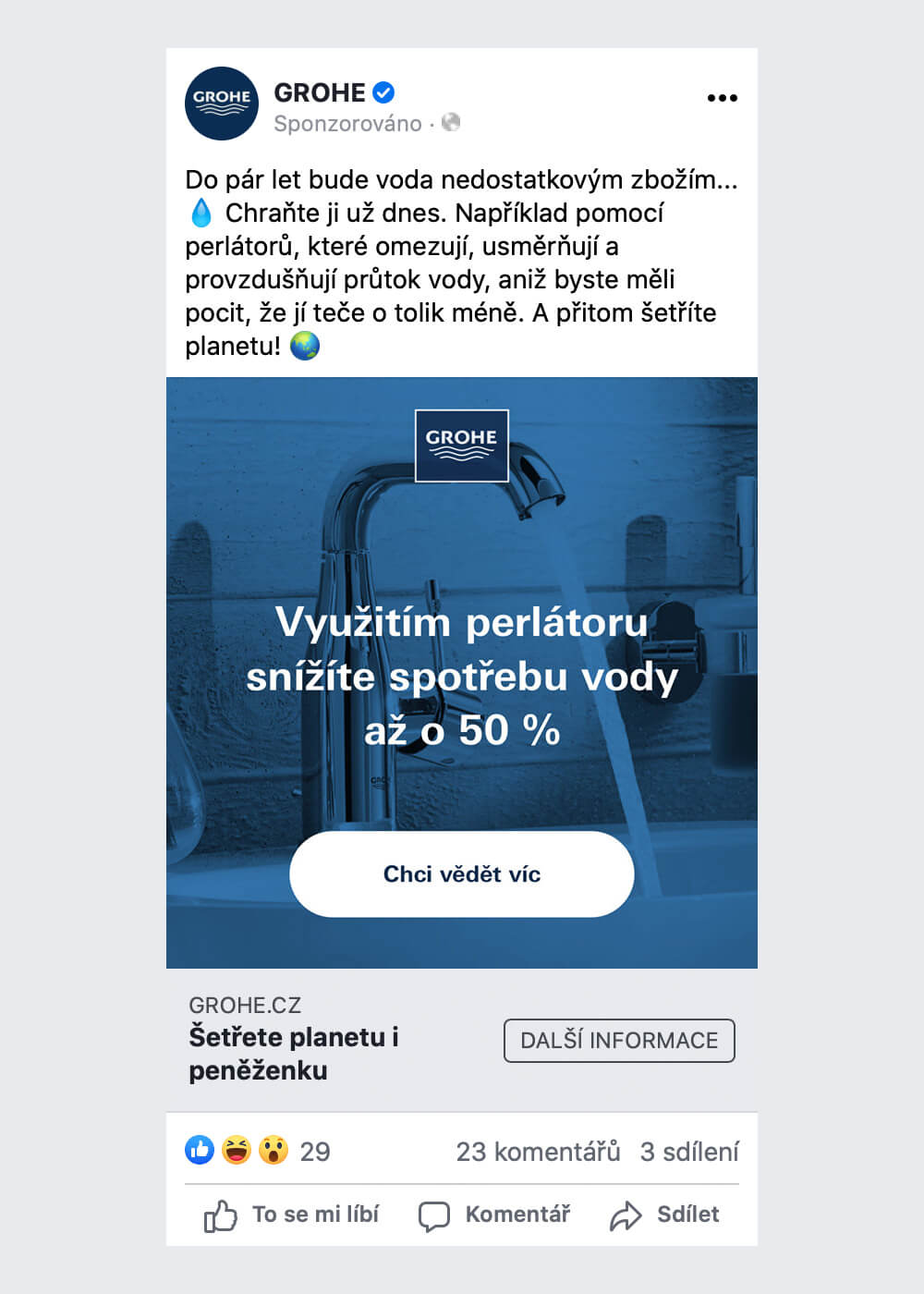 With respect to the campaign’s main objectives, we chose videos, animations, static contributions, 360° format and Instant Experience. Because of this, we managed to efficiently invest money, reach a broad target group (younger people on Instagram, older ones on Facebook) and gain better results than we had originally anticipated.

Without an open social discussion, it is impossible to change the perspective on any topic. It is crucial not to be afraid of people’s reactions, to actively respond and to moderate the debate. The best promotion is when users join the discussion, adopt the topic and become its ambassadors. And this is exactly what we managed to do! 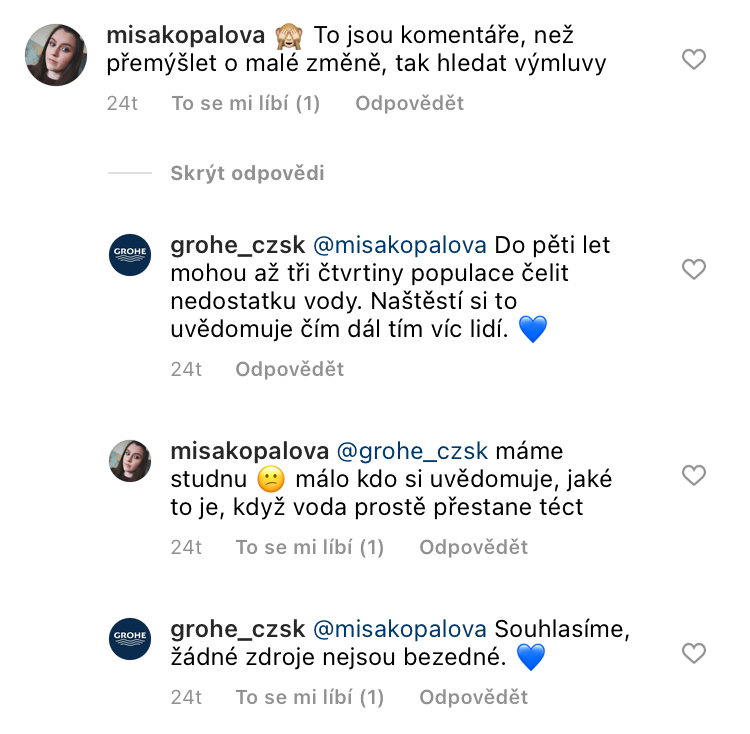 All roads lead to the microsite

The official Grohe web site provided only limited options for working with it. That is why we created the simple microsite voda.limited with tips for saving water. We linked to it from every channel. 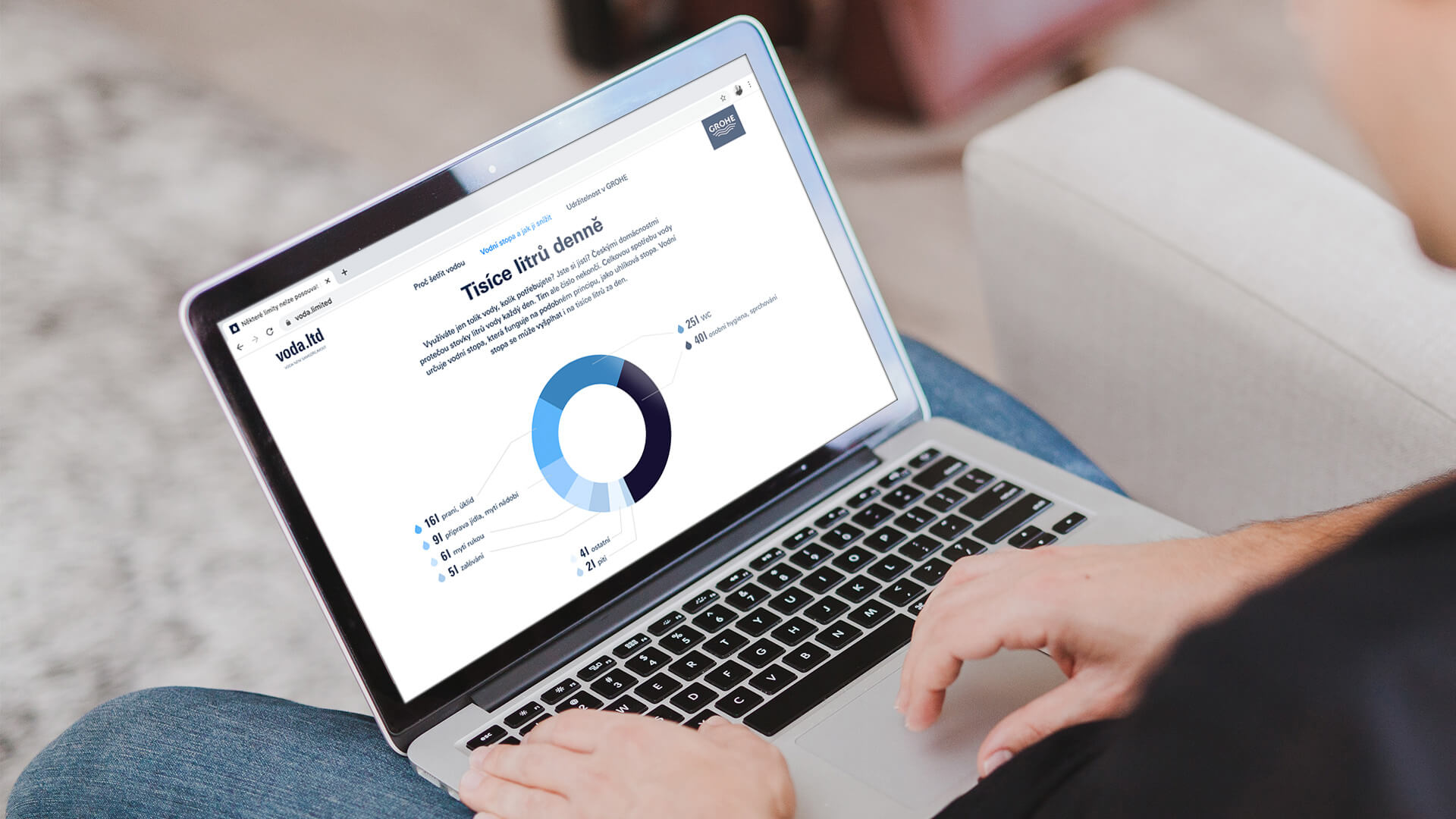 Challenge for influencers: 70 liters of water per day

Influencers were asked to try managing on only 70 liters of water per day – the amount available for inhabitants of Cape Town with its severe water shortage.

The aces up our sleeve were influencers Veronika Arichteva and Kovy. Kovy especially was able to attract media giants such as Blesk bydlení, where we arranged for an interview with him.

We prepared a transparent assignment for our influencers including information that may help them educate their fans. They shared water saving tips and interesting statistical data in their InstaStories. Both influencers had the greatest impact on the target group between 24 and 35 years of age. In comparison with the brand campaign on Grohe profiles, the influencers’ fans’ comments were much more positive (#nohate).

The campaign also appeared in lifestyle magazines and on web sites on living, ecology and marketing. Our press releases are based on cooperation with influencers, specific tips for saving water and money and comparisons of water consumption using various Grohe products and sanitary technologies. 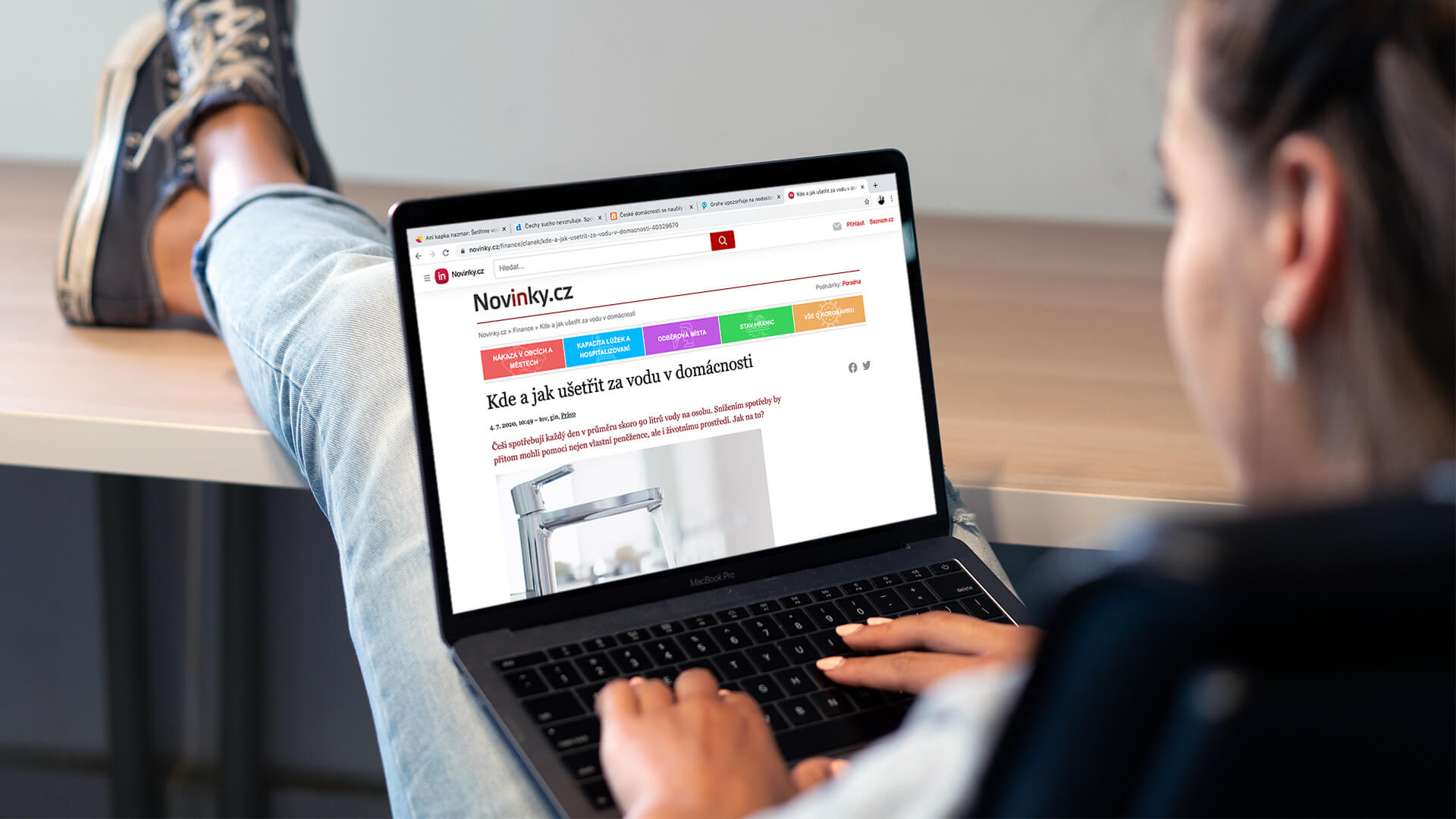 Results: Better than we hoped for

We managed to exceed all KPIs. The whole campaign was so successful, that we started discussions about localizing it for other countries.

1 163 007 unique users represent 83% of the target group we defined based on interests and campaign data. The campaign delivered 4 901 259 impressions in total with an average CPM of 36 CZK and average frequency of adverts viewed per user of 4.2, which is a very good result if we take into account that the campaign was optimized to send users to the microsite

InstaStories beat the other formats by miles

65% of budget was taken by Facebook and 35% by Instagram. It is interesting, though, that Instagram had 63% of the total views, mostly owing to interactive InstaStories. Use them in every phase of brand awareness; they are worth it. 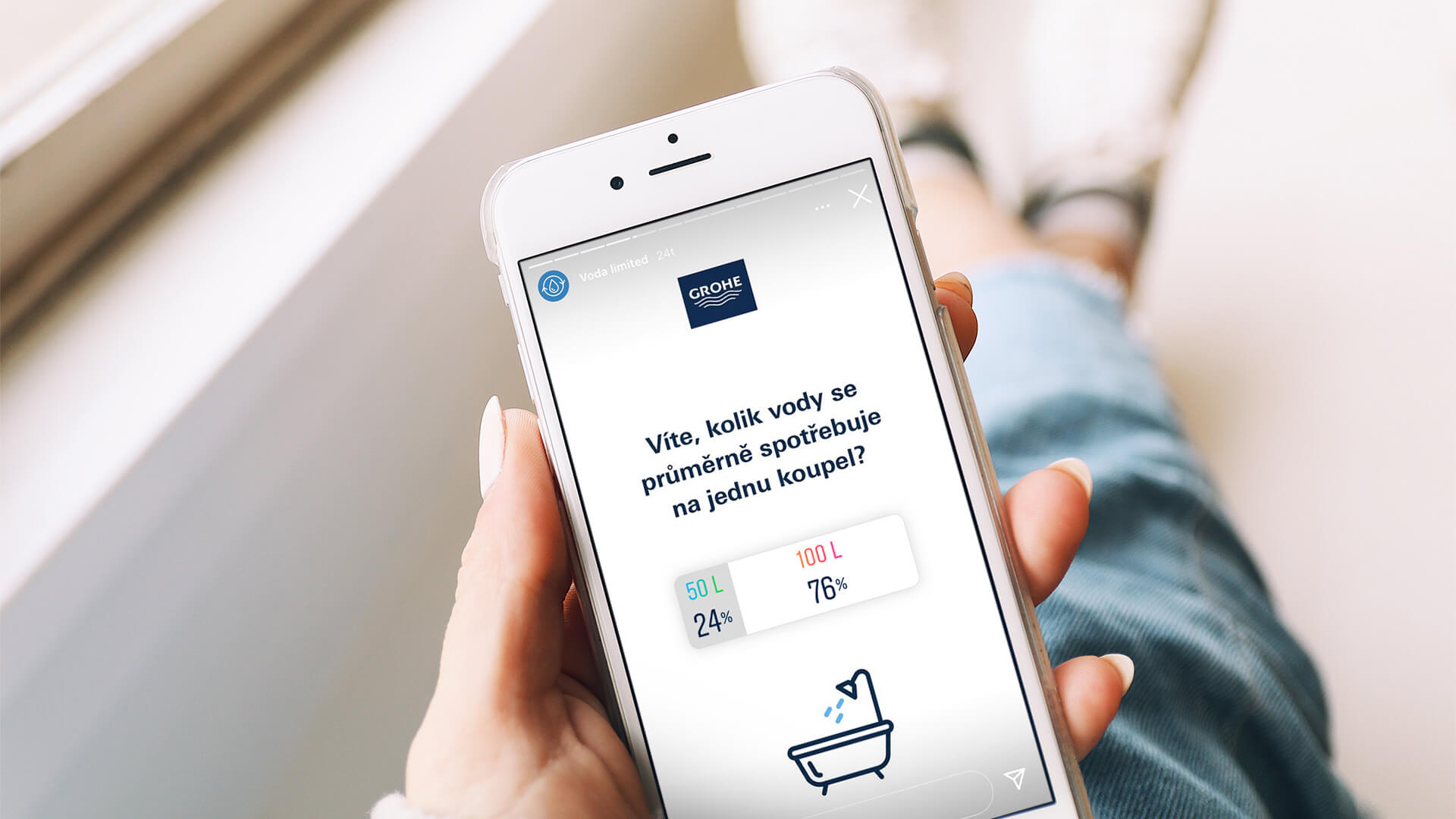 One-fifth of views came thanks to the influencers

Influencers – in whom we invested 27% of the costs – brought 20% of the views on the campaign microsite.

Twice the impact in the media

We had 25 mentions in the media and exceeded the plan by 20%. We had 10 huge media mentions with nationwide impact instead of the 5 we planned, which is twice as much!

70 total articles in the press

We managed to break through to all versions of the daily Deník, which means 72 articles on the web and 70 in the press across the entire Czech Republic. In spite of adverse circumstances (paradoxically, there were floods in the Czech Republic at that time) we managed to push the topic through to journalists and to agree on the direction the message could take in the future.

What is the lesson to be learned?

Campaign for Anytime, where minutes mattered

Literally. We managed to launch it in days.

We filled the largest pop-up in Central Europe

In one month! Thanks to our high-performing campaign and good PR.

We won a place for men in the bathroom

With the bold campaign Syoss Men for men’s cosmetics.

Leave us a message and we will get back to you

Thanks! We’ll get back to you ASAP.
Oops, unable to submit the form. How about emailing piero@neardear.cz instead?